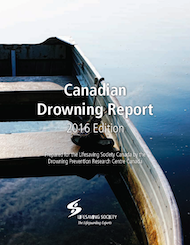 The Lifesaving Society Canada and the Drowning Prevention Research Centre have released the Canadian Drowning Report 2016 Edition. The report is available in English and in French.

The most recent data available from the Chief Coroner’s and Medical Examiner’s offices reveal that the significant longterm progress in reducing death by drowning in Canada has continued. After a spike in the number of water-related fatalities in 2012 (495), the number dropped to 466 in 2013. An average of 473 people drowned each year in the most current five-year period (2009-2013), down from an average of 481 per year in 2004-2008