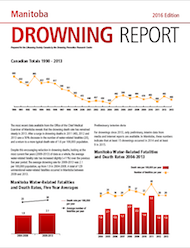 The Lifesaving Society and the Drowning Prevention Research Centre have released the Manitoba Drowning Report 2016 Edition.

The most recent data available from the Office of the Chief Medical Examiner of Manitoba reveals that the drowning death rate has remained steady in 2013. After a surge in drowning deaths in 2011 (40), 2012 and 2013 saw a 50% decrease in the number of water-related fatalities (20), and a return to a more typical death rate of 1.6 per 100,000 population.